Solitary confinement is by far the worst torture in the supermax. Human minds fare poorly in isolation, which “often results in severe exacerbation of a previously existing mental condition or in the appearance of a mental illness where none had been observed before,” Stuart Grassian, a Boston psychiatrist and authority on solitary confinement, writes in a brief for the Madrid case. Grassian believes supermaxes produce a syndrome characterized by “agitation, self-destructive behavior, and overt psychotic disorganization.” He also notes memory lapses, “primitive aggressive fantasies,” paranoia, and hallucinations.

Grassian’s is the consensus view among scholars concerned with solitary confinement. Peter Scharff Smith of the Danish Institute for Human Rights, who has surveyed in depth the literature concerning solitary confinement, writes, “Research on effects of solitary confinement has produced a massive body of data documenting serious adverse health effects.” Those effects may start within a few days, involve as many as three-quarters of supermax inmates, and often become permanent. Another expert on supermax confinement, psychiatrist Terry Kupers, writes, “being held in isolated confinement for longer than three months causes lasting emotional damage if not full-blown psychosis and functional disability.” 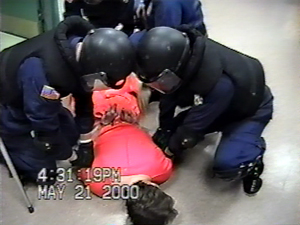 The throwing of feces, urine, and blood at guards; self-injury; and suicide attempts are common. A 2009 investigation of Illinois’s Tamms supermax by the Belleville News-Democrat depicted Faygie Fields, a schizophrenic imprisoned for killing a man in a drug deal. Fields regularly cut his arms and throat with glass and metal, swallowed glass, and smeared feces all over his cell. The prison reaction to this kind of behavior was predictable:

Prison officials charged him $5.30 for tearing up a state-owned sheet to make a noose to kill himself. . . . If he hadn’t been charged with crimes in prison, Fields could have been paroled in 2004 after serving 20 years of a 40-year sentence. But Fields must serve all the extra time for throwing food, urine and committing other offenses against guards. That amounts to 34 years, or 54 years total, that he must serve before becoming eligible for parole in 2038, at age 79.

This American system of administrative punishment except in extremely rare cases, prison staff, not judges, decide who goes into the hole has no counterpart in scale or severity. There are solitary-confinement cells in other countries’ prisons and the odd, small supermax, such as the Vught prison in the Netherlands, but they are few. When Corey Weinstein, a San Francisco physician, toured prisons in the United Kingdom in 2004 on behalf of the American Public Health Association, he was shown “eight of the forty men out of 75,000 [in England and Wales] considered too dangerous or disruptive to be in any other facility.” Seven of the eight

were out of their cells at exercise or at a computer or with a counselor or teacher. . . . With embarrassment the host took us to the one cell holding the single individual who had to be continuously locked down.

The British and other Europeans did use solitary confinement starting in the mid-nineteenth century, taking as models the American penitentiaries that had invented mass isolation in the 1820s. But Europe largely gave it up later in the century because, rather than becoming penitent, prisoners went insane. A shocked Charles Dickens, after visiting a Pennsylvania prison in 1842, called solitary confinement “immeasurably worse than any torture of the body.” Americans gave it up, too, in the late 1800s, only to resurrect it a century later.

Officially called the Special Management Unit or SMU, Maine’s supermax opened in 1992, hidden in the woods of the pretty coastal village of Warren. Ten years later the new, maximum-security Maine State Prison was built around it. Literally and metaphorically, the supermax’s 132 cells are the core of the stark, low, 925-inmate complex with its radiating “pods.” Maine’s crime and incarceration rates are among the lowest in the country, but its supermax is as brutal as any. After allegations of beatings by guards and of deliberately withheld medical care, the state police are currently investigating two inmate deaths in the SMU. Grassian has told a legislative committee that Maine’s supermax treats its inmates worse than its peers in many states.

Still, supermaxes are more alike than different. As America’s prisoner population exploded—the U.S. incarceration rate now is nearly four times what it was in 1980, more than five times the world average, and the highest in the world—overcrowding tossed urban state prisons into turmoil. The federal system provided a model for dealing with the tumult: in 1983 mayhem in the federal penitentiary in Marion, Illinois,  (Inmate Death at USP Marion, USP MARION Inmate search) resulted in a permanent lockdown and, effectively, the first supermax. “No evidence exists that states undertook any rigorous assessment of need,” Mears, the Florida State criminologist, writes of supermax proliferation, but the states still decided they would segregate whomever they deemed the most troublesome inmates. Maine’s supermax is a case in point, constructed in the absence of prisoner unrest. George Keiser, a veteran prisons official who works for the Department of Justice’s National Institute of Corrections, puts it bluntly: supermaxes became “a fad.”

An expensive fad. American supermax buildings are so high-tech and the management of their prisoners is so labor-intensive that the facilities “typically are two to three times more costly to build and operate than other types of prisons,” Mears writes. Yet, according to Keiser, tax money poured into supermax construction because these harsh prisons were “the animal of public-policy makers.” The beast was fed by politicians capitalizing on public fears of crime incited by increasing news-media sensationalism.

There was no significant opposition to the supermaxes, even when it became clear that the mentally ill would be housed there. Legislatively mandated deinstitutionalization meant patients were thrown onto the streets without enough community care, and eventually many wound up in jails and prisons. Also, “for a time,” Keiser said, “there was a thought that nothing worked” to rehabilitate prisoners. With conservative scholars such as James Q. Wilson leading the way in the 1970s, “corrections” was essentially abandoned.